Happy Tuesday, everyone! This is my first #TopTenTuesday blog post, and this is the exact challenge I’ve been looking for to post more non-review content on my blog. This is hosted by Jana at That Artsy Reader Girl, and if you’re interested, you can find a list of the future (and past) prompts by clicking on her blog name.

Today, after my three back-to-back classes (haha, fun), I’m headed to The Strand Bookstore to celebrate King of Scars‘ book birthday with none other than the genius herself—Leigh Bardugo! I plan on going to the fan meetup at 6, and then enjoying the signing with my friends at 7 before heading out for a late dinner. I actually left my copies of Crooked Kingdom and Shadow and Bone at home, and I got my mom to ship them over to me. So thank you, Mom. I love you!

Anyway, back to the topic— below you can see ten of my recent additions to the endless TBR pile that’s slowly taking over my life. It’s actually getting kind of out of hand, but I do have a reading goal of 220, so I really have to push myself to read more and procrastinate less. You can find my Goodreads here, in case you want to shoot me a friend request or just keep up with whatever I’m currently reading!

1. Wicked Saints by Emily A. Duncan

A girl who can speak to gods must save her people without destroying herself.

A prince in danger must decide who to trust.

A boy with a monstrous secret waits in the wings.

Together, they must assassinate the king and stop the war.

In a centuries-long war where beauty and brutality meet, their three paths entwine in a shadowy world of spilled blood and mysterious saints, where a forbidden romance threatens to tip the scales between dark and light. Wicked Saints is the thrilling start to Emily A. Duncan’s devastatingly Gothic Something Dark and Holy trilogy.

A marvel: something you find amazing. Even ordinary-amazing. Like potatoes—because they make French fries happen. Like the perfect fries Adam and his mom used to make together.

An oddity: whatever gives you pause. Like the fact that there are hateful people in the world. Like Zayneb’s teacher, who won’t stop reminding the class how “bad” Muslims are.

But Zayneb, the only Muslim in class, isn’t bad. She’s angry.

When she gets suspended for confronting her teacher, and he begins investigating her activist friends, Zayneb heads to her aunt’s house in Doha, Qatar, for an early start to spring break.

Fueled by the guilt of getting her friends in trouble, she resolves to try out a newer, “nicer” version of herself in a place where no one knows her.

Then her path crosses with Adam’s.

Since he got diagnosed with multiple sclerosis in November, Adam’s stopped going to classes, intent, instead, on perfecting the making of things. Intent on keeping the memory of his mom alive for his little sister.

Adam’s also intent on keeping his diagnosis a secret from his grieving father.

Alone, Adam and Zayneb are playing roles for others, keeping their real thoughts locked away in their journals.

Until a marvel and an oddity occurs…

3. The Unhoneymooners by Christina Lauren

Olive is always unlucky: in her career, in love, in…well, everything. Her identical twin sister Amy, on the other hand, is probably the luckiest person in the world. Her meet-cute with her fiancé is something out of a romantic comedy (gag) and she’s managed to finance her entire wedding by winning a series of Internet contests (double gag). Worst of all, she’s forcing Olive to spend the day with her sworn enemy, Ethan, who just happens to be the best man.

Olive braces herself to get through 24 hours of wedding hell before she can return to her comfortable, unlucky life. But when the entire wedding party gets food poisoning from eating bad shellfish, the only people who aren’t affected are Olive and Ethan. And now there’s an all-expenses-paid honeymoon in Hawaii up for grabs.

Putting their mutual hatred aside for the sake of a free vacation, Olive and Ethan head for paradise, determined to avoid each other at all costs. But when Olive runs into her future boss, the little white lie she tells him is suddenly at risk to become a whole lot bigger. She and Ethan now have to pretend to be loving newlyweds, and her luck seems worse than ever. But the weird thing is that she doesn’t mind playing pretend. In fact, she feels kind of… lucky.

When assassins ambush her best friend, Rielle Dardenne risks everything to save him, exposing herself as one of a pair of prophesied queens: a queen of light, and a queen of blood. To prove she is the Sun Queen, Rielle must endure seven elemental magic trials. If she fails, she will be executed…unless the trials kill her first.

One thousand years later, the legend of Queen Rielle is a fairy tale to Eliana Ferracora. A bounty hunter for the Undying Empire, Eliana believes herself untouchable–until her mother vanishes. To find her, Eliana joins a rebel captain and discovers that the evil at the empire’s heart is more terrible than she ever imagined.

As Rielle and Eliana fight in a cosmic war that spans millennia, their stories intersect, and the shocking connections between them ultimately determine the fate of their world–and of each other.

5. Last of Her Name by Jessica Khoury

Sixteen years ago, rebellion swept the galaxy known as the Belt of Jewels. Every member of the royal family was murdered–down to their youngest child, Princess Anya–and the Union government rose in its place. But Stacia doesn’t think much about politics. She spends her days half-wild, rambling her father’s vineyard with her closest friends, Clio and Pol.

That all changes the day a Union ship appears in town, carrying the leader of the Belt himself, the Direktor Eminent. The Direktor claims that Princess Anya is alive, and that Stacia’s sleepy village is a den of empire loyalists, intent on hiding her. When Stacia is identified as the lost princess, her provincial home explodes into a nightmare.

Pol smuggles her away to a hidden escape ship in the chaos, leaving Clio in the hands of the Union. With everything she knows threading away into stars, Stacia sets her heart on a single mission. She will find and rescue Clio, even with the whole galaxy on her trail.

6. Natalie Tan’s Book of Luck and Fortune by Roselle Lim 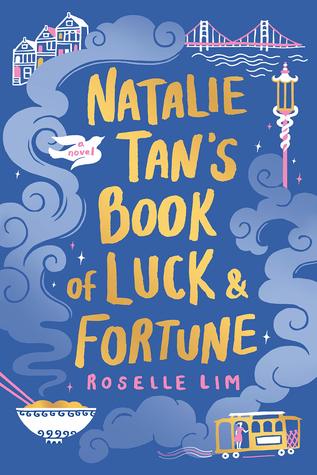 At the news of her mother’s death, Natalie Tan returns home. The two women hadn’t spoken since Natalie left in anger seven years ago when her mother refused to support her chosen career as a chef. Natalie is shocked to discover the vibrant neighborhood of San Francisco’s Chinatown that she remembers from her childhood is fading, with businesses failing and families moving out. She’s even more surprised to learn she has inherited her grandmother’s restaurant.

The neighborhood seer reads the restaurant’s fortune in the leaves: Natalie must cook three recipes from her grandmother’s cookbook to aid her struggling neighbors before the restaurant will succeed. Unfortunately, Natalie has no desire to help them try to turn things around—she resents the local shopkeepers for leaving her alone to take care of her agoraphobic mother when she was growing up. But with the support of a surprising new friend and a budding romance, Natalie starts to realize that maybe her neighbors really have been there for her all along.

7. A Match Made in Mehendi by Nandini Bajpai 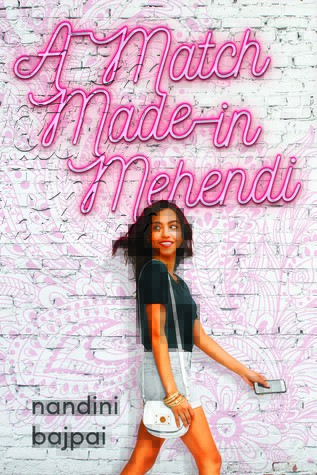 Fifteen-year-old Simran “Simi” Sangha comes from a long line of Indian vichole-matchmakers-with a rich history for helping parents find good matches for their grown children. When Simi accidentally sets up her cousin and a soon-to-be lawyer, her family is thrilled that she has the “gift.”

But Simi is an artist, and she doesn’t want to have anything to do with relationships, helicopter parents, and family drama. That is, until she realizes this might be just the thing to improve her and her best friend Noah’s social status. Armed with her family’s ancient guide to finding love, Simi starts a matchmaking service-via an app, of course.

But when she helps connect a wallflower of a girl with the star of the boys’ soccer team, she turns the high school hierarchy topsy-turvy, soon making herself public enemy number one.

8. We Rule the Night by Clare Eliza Bartlett

Seventeen-year-old Revna is a factory worker, manufacturing war machines for the Union of the North. When she’s caught using illegal magic, she fears being branded a traitor and imprisoned. Meanwhile, on the front lines, Linné defied her father, a Union general, and disguised herself as a boy to join the army. They’re both offered a reprieve from punishment if they use their magic in a special women’s military flight unit and undertake terrifying, deadly missions under cover of darkness. Revna and Linné can hardly stand to be in the same cockpit, but if they can’t fly together, and if they can’t find a way to fly well, the enemy’s superior firepower will destroy them–if they don’t destroy each other first.

We Rule the Night is a powerful story about sacrifice, complicated friendships, and survival despite impossible odds.

9. The Bone Witch by Rin Chupeco

Let me be clear: I never intended to raise my brother from his grave, though he may claim otherwise. If there’s anything I’ve learned from him in the years since, it’s that the dead hide truths as well as the living.

When Tea accidentally resurrects her brother from the dead, she learns she is different from the other witches in her family. Her gift for necromancy means that she’s a bone witch, a title that makes her feared and ostracized by her community. But Tea finds solace and guidance with an older, wiser bone witch, who takes Tea and her brother to another land for training.

In her new home, Tea puts all her energy into becoming an asha-one who can wield elemental magic. But dark forces are approaching quickly, and in the face of danger, Tea will have to overcome her obstacles…and make a powerful choice.

10. The Fever King by Victoria Lee

In the former United States, sixteen-year-old Noam Álvaro wakes up in a hospital bed, the sole survivor of the viral magic that killed his family and made him a technopath. His ability to control technology attracts the attention of the minister of defense and thrusts him into the magical elite of the nation of Carolinia.

The son of undocumented immigrants, Noam has spent his life fighting for the rights of refugees fleeing magical outbreaks—refugees Carolinia routinely deports with vicious efficiency. Sensing a way to make change, Noam accepts the minister’s offer to teach him the science behind his magic, secretly planning to use it against the government. But then he meets the minister’s son—cruel, dangerous, and achingly beautiful—and the way forward becomes less clear.

Caught between his purpose and his heart, Noam must decide who he can trust and how far he’s willing to go in pursuit of the greater good.

….And that’s it for the ten most recent adds! Honestly, if I had been given a bigger number, I would’ve been able to fit all the book releases I’m anticipating this year.

Now it’s my turn to ask: Have you read any of these books? What’s on your TBR? Any particular 2019 release you’re looking forward to? Let me know in the comments below.

Hey, I'm Kaitlyn! Just a 20-year-old university student from Manila trying not to get lost in NYC. I blog about YA and diverse books on the side, and can often be found munching on sour patch and cups of frozen yogurt while consuming an unhealthy amount of fanfiction and fantasy novels.

I hope you enjoy your time on my blog!

Copyright © 2021 · Amelia on Genesis Framework · Powered by WordPress.com. · Log in